I am a Tofurky fan.
I am a sausage fan actually, but with a delicate stomach I decided to stay away from hot dogs and sausages after a couple food poisoning episodes that kept me running to the toilet for a couple of days, years before I decided to follow a greener diet. Later on, finding out what hot dogs are actually made of, wow! not touching that crap again!!…

But I missed them. I really did. And when the vegetarian food industry started making hot dogs and sausages a glimpse of hope shown in my eyes… just to be crushed by the carton-like flavor and chewy weird texture of this not-even-close-to-hot-dog item 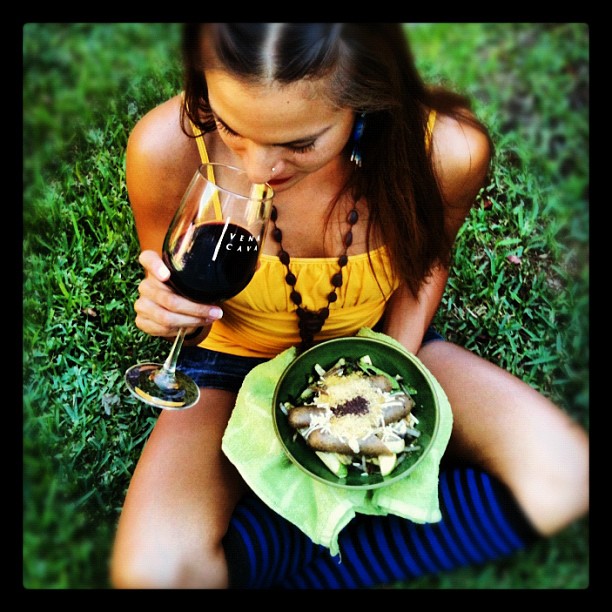 s. Oh no! … until Tofurky. THEN I got to have it all: sausages like you won’t believe they’re so tasty, juicy, thick and that were very well aproved by my picky belly. I’m a naughty vegan in heaven!!

Now it’s lunch time and with some remainings of the Ninjapalooza in the fridge, fajitas are in order! Step one, open a bottle of red wine ’cause it’s one of those days 🙂

What I like the most about fajitas is how easy they are, begin by roasting the sausages and in the mean time just slice the veggies and stir fry them until golden. Keep the fire high so you can roast them on the outside but keep them crunchy inside, nobody likes smooshy veggies, add the lime juice, pepper and salt. Now put some Daiya cheese on top of the sausages and keep roastong until melted.
Serve the veggies first, then the roasted cheesy saussage on top and spinkle some nutritional yeast and dulce granules on top, your red wine right there… come on, that can not be healthy, it’s too tasty, too naughty, too freakin’ good to be healthy!! And yet IT IS.